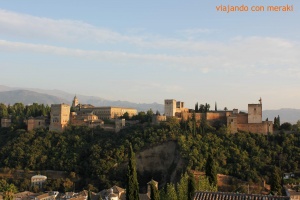 Having a travel blog, being from Granada and not having any entry on my wonderful city is unforgivable, so here are some tips for places to visit, restaurants to eat and tips that will be useful during your stay.

If you are looking for accommodation in this city, take a look at the family tourist apartments and contact me without problem to check availability and prices.

You can take a private tour to go get a deep knowledge, or simply explore it by yourselves. There’s also a touristic train that runs through the most typical neighborhoods and the most important monuments.

A little bit of history

Legend says Granada owes its name to one of the daughters of Noah or Hercules called “Granata”, although in the history of Granada its name is documented before the Arab conquest in the Jewish neighborhood of “Garnata”.

In the year 306 the Council of Elvira was celebrated, the first of Spain. The three populations that existed during the Muslim invasion (Elvira, Qastilla and Garnata) depended on the Caliphate of Cordova. At the end of the 11th century the Almoravid invasion ended the Zirid dynasty and in 1237 the constitution of the Kingdom of Granada was completed, which remained the last Muslim stronghold until 1492.

In the fourteenth century, during the reigns of Yusuf I and Muhammad V, Granada lived its maximum splendor. At that time the whole of the Alhambra and the Generalife was built, forming the most visited and famous monument in Spain.

On January 2, 1492, Granada is taken by the Catholic Monarchs. A new era of the history of Granada begins, with the splendor of Christian culture, and even more so with the arrival of the Emperor Charles V, building all the great Christian monuments, coinciding with late Gothic and Renaissance. The splendor would return in the seventeenth and eighteenth centuries, with the great works of the Baroque and Post-Baroque buildings.

There would be a decline in the following centuries, and Granada won’t return to popularity until the arrival of the writer Washintong Irving. With the arrival in Granada of Queen Elizabeth II, in 1862, Granada capital gains boom again.

Here I leave a map for you to locate and the personalized guide of Granada: 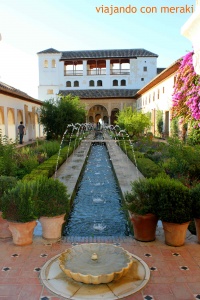 The Alhambra, named for its walls of reddish color, is located on the top of the hill of al-Sabika, facing the neighborhoods of the Albaicin and the Alcazaba. Its strategic position means that it dominates the entire city and the fertile valley of Granada. Its set is completely walled and has an irregular shape. 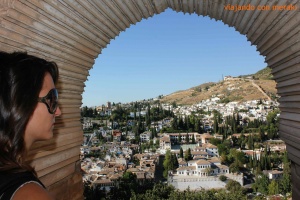 It is recorded for the first time in the ninth century, when in 889 Sawwar ben Hamdun had to take refuge in the Alcazaba and repair it due to civil strife that hit the Caliphate of Cordova, to which Granada belonged. Later, this enclosure began to expand and to be populated, although not until what would be later, since the first zirid monarchs fixed their residence in what later would be the Albaicín. Despite the addition of the Alhambra castle to the city walls in the 11th century, which made it a military fortress from which the entire city was dominated, it was not until the 13th century with the arrival of the first monarch Nazari, Mohamed ben Al-Hamar (Mohamed I, 1238-1273) when the royal residence was set at the Alhambra. This fact marked the beginning of its period of greatest splendor. First the old part of the Alcazaba was reinforced, and the Torre de la Vela and the Tribute were built, water was raised from the Darro River, warehouses, deposits were built and the construction of the palace and the walled enclosure that Mohamed II continued (1273 -1302) and Mohamed III (1302-1309), who are also attributed a public bath and the Mosque on which the present church of Santa María was built. We owe to Yusuf I (1333-1353) and Mohamed V (1353-1391) the immense majority of the constructions of the Alhambra that have reached our time. From the renovation of the Alcazaba and the palaces, through the extension of the walled enclosure, the Door of Justice, the extension and decoration of the towers, construction of the Baths and the Comares Room, the Barca Room, until the Patio de los Leones and its annexes. Of the later Nasrid kings virtually nothing is preserved. From the time of the Catholic Monarchs to today we can highlight the demolition of part of the architectural complex by Charles V to build the palace that bears his name, the construction of the Emperor’s rooms and the Queen’s Peinador and the abandonment of the conservation of the Alhambra from the 18th century. During the French domination part of the fortress was flown and until the 19th century it did not begin its repair, restoration and conservation that is maintained until today.

The most significant historical monuments of the city, after the Alhambra and the Generalife, are the Charterhouse and the cathedral and royal chapel, between various churches, monasteries, etc. 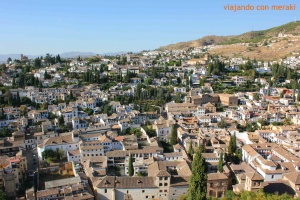 If you are going to spend more than 2 days in Granada, here is a link with my personal guide to visit the surroundings of Granada.

Granada is famous for its tapas. In all the bars you go to, for each drink they will give you a small portion of food included in the price of the drink. It is difficult to make a list with the best ones (since this is very personal), but I will leave you a list of my favorites: