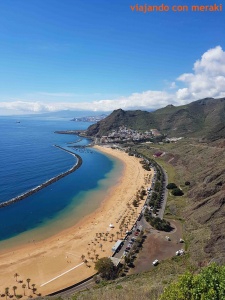 I was 8 years old and it was the first time I was traveling by plane. My family decided to spend a Christmas in the Canary Islands and we spent a week in the south of Tenerife. Spending Christmas day at 25 degrees bathing on the beach without a doubt influenced the idea of ​​paradise that I have always had in mind when referring to the fortunate islands.

I have been lucky enough to visit many of these islands (to this day I still miss La Palma and El Hierro… I like to leave the best for last) and until now Tenerife would be in fourth place behind Lanzarote, Fuerteventura and La Gomera and ahead of Gran Canaria.

Tenerife is the most extensive island of the Canary archipelago and the most populated of Spain (almost 900,000 inhabitants). Its capital, Santa Cruz de Tenerife, is also the only capital of the Canarian archipelago. It is crossed by a mountain range, in whose center a gigantic volcanic formation rises located on an ancient and enormous depression. To the North of the same, to 3.718 meters on the sea, the Pico del Teide rises, volcano settled on an extensive and ancient volcanic caldera, called Las Cañadas, in which the volcanic cones and the lava flows form one of the landscapes most exceptional that can be contemplated. This extreme and fascinating landscape is located within a magnificent Natural Park that impresses with its landscapes and contrasts, especially in winter, when we can appreciate the snow-capped peaks along with valleys of exuberant fertility.

For all these climatic and geological factors, it is not a surprise that the island offers a unique and varied flora, with large and leafy mountains, extensive valleys with plantations of bananas and tomatoes, and fields flooded with poinsettia in spring. Also its coast presents beautiful cliffs, contrasting with soft beaches of fine sand, black or gold.

Thanks to its strategic location, the Canary Islands usually have good weather throughout the year. While it is true that during the summer it is a bit warmer and good weather is practically assured, during the winter it is possible that it will be worse. I have experienced the sharp differences in climate that may exist between the north and the south of the same island, so if I had a choice, I would always try to choose an accommodation in the south of the islands, to try to ensure that I will have good weather the whole stay. Generally, on the same day it may be windy and cold in the north and make a good day in the south.

WHEN TO TRAVEL TO THE CANARY ISLANDS

Personally, the best time to travel to the Canary Islands would be from October to May. The summer months are going to be good weather all over Europe, so I prefer to run away from the cold during the winter. It is true that December is high season, and everyone wants to spend Christmas here, but outside that date the prices are quite good, the occupation is not high and you will probably have a very pleasant time.

HOW MANY DAYS TO VISIT TENERIFE?

As I said before, Tenerife is the largest island in the archipelago and also, it is the one that offers a greater variety of tourist offer, so if you want to discover at least the 10 essentials of the island, I recommend a week stay. You could do it in 5 days, but it would be to go with the tongue out and without enjoying.

Here is my guide to know what to see and what to do in Tenerife during your trip with my personal recommendations.